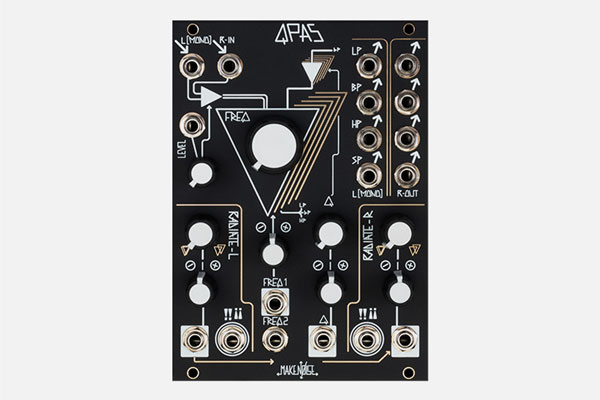 €429.00
In Store
This item is available at our store. Ready for shipment.

This product is not eligible for the price match. Write us if you need more infos.

QPAS (Quad Peak Animation System) is a stereo multimode eurorack filter module designed by Tony Rolando and inspired by the time where he was working at Moog. It utilize four filter cores for dynamic animation of resonant peaks. Stereo pairs for Low Pass, High Pass, Band Pass, and a new filter type called “Smile Pass”, are all available simultaneously.

Two Radiate controls, one for each pair of cores, further modulate the various cutoff peaks’ distance from each other and from the “main” cutoff frequency, providing animation and increasing the depth of the sound.

The !!¡¡ inputs are clock, gate or audio rate modulation inputs that reward experimentation, affecting nearly all parts of the circuit. Each !!¡¡ input affects two of the peaks, one per pair.

The QPAS is a 100% analog filter for musical applications and is not suitable for laboratory use.