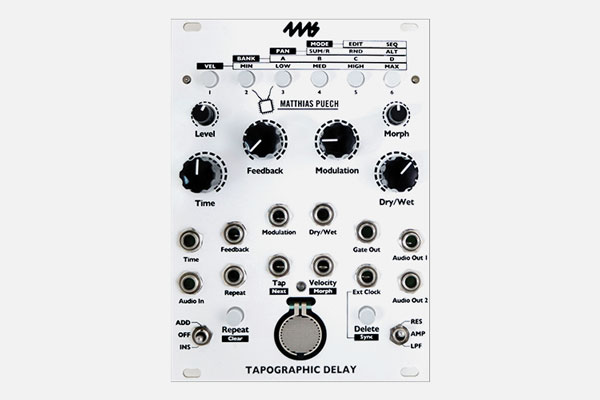 €399.00
On Request
This item is on request and it is usually available in 10-15 working days. Send us an email to get an accurate extimate of delivery time.

The Tapographic Delay is a complex multi-tap delay in the Eurorack format with a unique interface designed for live performance designed by Matthias Puch. It excels at transforming the simplest audio (a drone, a percussive sound) into complex rhythmic structures, meshes of organic textures, lush harmonic mille-feuilles, liquid and resonant effects.

The Tapographic Delay is an advanced effect that lets you handle repetition in a completely novel way. It is to a traditional delay what a full rhythmic sequencer (with pattern recall, velocity control, tactile input) is to a simple clock. The Tapographic Delay is an expressive experimental instrument meant to be played in real-time, rather than a set-and-forget end-of-chain effect. Interact with it! Experiment! Push it to its limits!